Narcolepsy vs Hypersomnia: Differences and Treatment 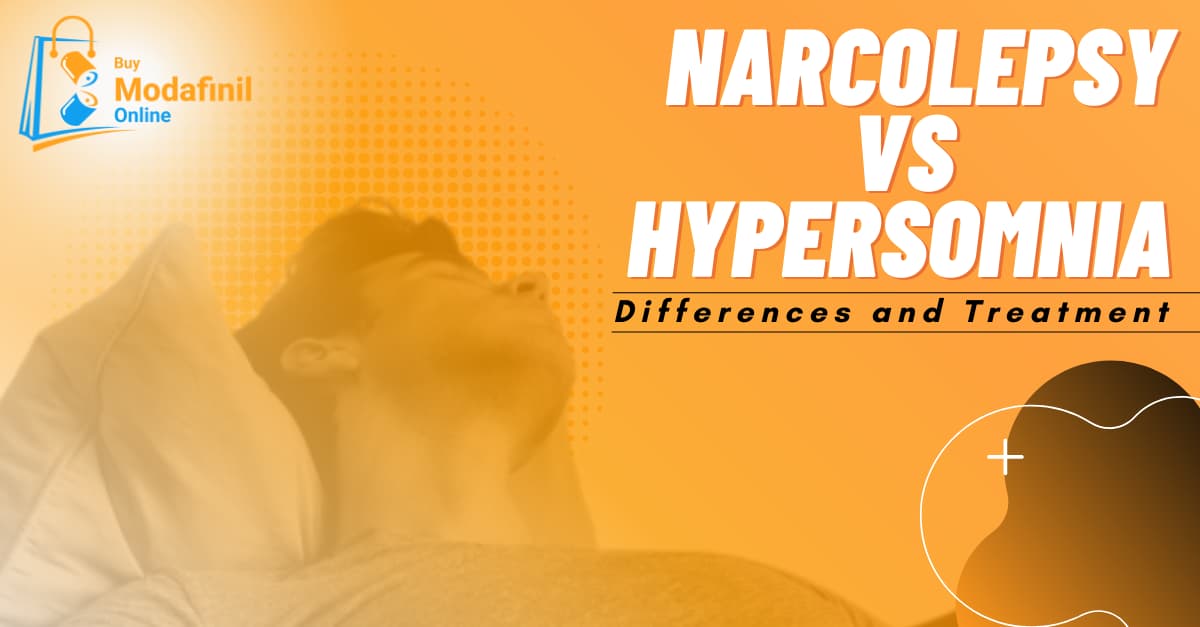 In this blog, we shall discuss these conditions to find a better understanding of them.

Hypersomnia is derived from the terms Hyper (greek) and Somnus (Latin). The prefix “hyper-” is usually added to imply excessive, while somnus means sleep. Together, ‘hypersomnia’ simply means excessive sleep. It is a condition characterized by uncontrollable sleepiness.

Hypersomnia is not a disease. It is a symptom observed in a variety of sleep disorders like narcolepsy, sleep apnea, or RLS. Hypersomnia or excessive sleep is caused due to these underlying disorders. In these cases, the normal sleep cycle of a person is hampered. This might be in the form of interrupted sleep, unable to fall asleep, or poor quality of sleep. Cumulatively, this causes sleep deprivation which leads to uncontrollable sleep during daytime or work hours, aka, hypersomnia.

It is also possible for hypersomnia to not be associated with any underlying disease. Temporary hypersomnia can be caused due to the side effects of certain drugs or prolonged sleep deprivation. Much like sleep deprivation caused due sleep disorders, these too result in uncontrollable excessive sleepiness or drowsiness in the daytime. Hypersomnia in these cases is associated with fatigue. It comes with the inability to focus and carry out daily activities even if a person manages to stay away from the feeling of drowsiness.

Hypersomnia is also associated with several psychological disorders, with depression being the most common of them. Individuals suffering from a range of depressive disorders or trauma often find it difficult to motivate themselves to carry on with their daily lives. This often manifests as staying in bed and oversleeping. Depression can be caused due to several socio-environmental triggers but results in chemical disbalances in the brain that form the clinical cause of depression. Studies suggest that the levels of dopamine are often lowered in the bodies of individuals suffering from chronic depression. Dopamine is a neurotransmitter that helps with emulating feelings of happiness and motivation. A lack of the molecule in your body thus results in a depressive condition. Incidentally, dopamine is also responsible for producing alertness and focus in the body. As a result, hypersomnia is often a key symptom of depression. Individuals with depression often struggle with staying alert or awake. The lack of motivation to perform daily chores adds to the case of oversleeping. Additionally, medications for depression are known to have hypersomnia as a side effect. This is because the most common antidepressants belong to the class of SSRI drugs, which increase the amount of serotonin in the body. While serotonin cannot emulate feelings of motivation or alertness like dopamine, it can cause a sensation of satisfaction. However, serotonin is also responsible for causing sleep in the body, resulting in people taking the medications being excessively sleepy despite getting optimum sleep.

How is hypersomnia treated?

As hypersomnia is not a disease but a symptom or condition caused by diseases or other factors, the treatment of hypersomnia mainly depends on the factor causing hypersomnia. In general, there are three broad approaches to treating hypersomnia:

Treatment of causal factor - Hypersomnia can be caused by underlying disorders like narcolepsy, sleep apnea, or restless leg syndrome (RLS). In the case that an individual showing hypersomnic symptoms is diagnosed with a sleep disorder, the primary approach to treatment involves managing the underlying condition. In most cases, once the treatment for sleep disorders begins, the signs of hypersomnia are cured. The treatment might not always involve curbing excessive sleep, but instead involve ensuring good sleep. For example, in the case of obstructive sleep apnea, patients are given breathing machines that help them avoid disrupted sleep, which in turn, reduces their signs of hypersomnia.

Change in lifestyle - Hypersomnia can be acutely caused when an individual is tired or sleep deprived. Usually, this can be easily reversed if the person receives optimum sleep. If this is a persistent problem, or if the person chronically suffers from poor quality sleep, lifestyle changes including a proper diet, adhering to a sleep schedule, meditation, and exercise are advised to get rid of hypersomnia during work hours.

Treatment with medication - As hypersomnia is simply a condition where people sleep excessively, it can be directly treated using medication that acts as a stimulant to the CNS. Older drugs like Adderall or Ritalin stimulate the CNS to create an excess of dopamine in the body, which results in alertness and hyperactivity. However, these drugs come with high risks of addiction and dependency. A newer generation of CNS stimulants called eugeroics is mild DRIs that elevate the amount of dopamine in the body without running the risks of addiction or dependency. Modafinil is the most popular eugeroic which is highly efficient at promoting alertness and focus. It is currently commonly used as a prescription drug as well as off-label to reduce excessive sleep. If you struggle to stay awake, you can easily buy Modafinil online and start managing the condition yourself. You only need to consult a physician if the problem persists.

Narcolepsy is a form of neurological disorder that affects the body’s ability to control the sleep-wake cycle. Narcoleptics are excessively and uncontrollably sleepy during the day. Additionally, they might fall asleep abruptly while participating in daily tasks, from chores to conversations.

There are two types of narcolepsy: type I and type II. Type I narcolepsy is associated with cataplexy, a sudden loss of muscle control, while type II narcolepsy only involves excessive sleeping. Although cataplexy is seen with narcolepsy, it is not a condition that affects muscles of normal muscular control. Narcolepsy is entirely associated with the loss or reduction of the capacity to control the sleep-wake cycle. Normally, any healthy person has a bodily cycle called the circadian rhythm, which controls most of our daily habits like sleep and hunger. The circadian rhythm is maintained through a complex balance of nerve signals and hormones. In the case of narcolepsy, the neurological network responsible for controlling the sleeping pattern is affected. As a result, the body loses control over when to fall asleep and when to stay awake. This results in narcoleptics falling asleep abruptly. Additionally, normal sleep follows a 90 minutes sleep cycle where a stretch of deep, non-REM sleep is flanked by short stretches of light REM sleep. In the case of narcoleptics, REM sleep does not occur, resulting in immediate deep sleep, with motor control shut down.

The common symptoms of narcolepsy may include:

The proper pathophysiology of narcolepsy is still unclear to researchers. Based on present information, it is considered a neurological disorder associated with impairment of sleep-wake cycle control. As discussed before, the sleep-wake cycle is a part of the normal circadian rhythm of the body. The circadian rhythm is supremely controlled by the hypothalamus present in the forebrain. The entire system is supervised by the hypothalamus through the cyclic release of different hormones and neurotransmitters. For example, the neurotransmitters dopamine and serotonin work antagonistically to cause alertness and sleep, respectively. The sleep-wake cycle is also heavily controlled by the hormone melatonin. However, disruptions in the pathways of these molecules were not found in studies involving narcolepsy. Another hormone called hypocretin was found to be responsible for causing narcolepsy. The exact biochemical mechanism of how hypocretin results in narcolepsy is yet to be deduced.

It is assumed that narcolepsy has a genetic basis. Individuals with narcolepsy in their families run a high risk of developing narcolepsy themselves, which supports the assumption of genetic involvement in the condition. Age is also a risk factor for narcolepsy. Individuals are most susceptible to developing narcolepsy between the ages of 15 to 25, after which it is likely to persist for the rest of their lives. Ongoing research is trying to detect the exact gene that is responsible for narcolepsy, but there has been no success on that front yet.

There is no cure for narcolepsy, but medications and lifestyle modifications can help you manage the symptoms.

Hypersomnia is simply a condition of excessive sleep that can be caused by a myriad of underlying disorders, primarily those that involve those that hamper the normal sleep-wake cycle of an individual. In simpler words, hypersomnia is caused when an individual does not get enough good quality sleep. General fatigue and sleep deprivation due to a busy schedule can also lead to hypersomnia, which is then easily reversed once the person has rested well. Naturally, hypersomnia is treated mainly by focusing on ensuring quality sleep and removing additional drowsiness. Lifestyle changes that promote a healthy sleep schedule are often enough to treat hypersomnia. In persistent cases where incurable underlying disorders are involved, eugeroics like modafinil are prescribed to promote alertness. Narcolepsy is a neurological disorder that often manifests as hypersomnia. Unlike hypersomnia which only involves excessive sleeping, narcolepsy is also associated with other symptoms including hallucinations, sleep paralysis, and disrupted sleep among affected individuals. It is incurable at the moment but can be managed with medications. Modafinil and armodafinil for the primary and most effective treatments for narcolepsy.

Page Content
What is Hypersomnia?
How is hypersomnia treated?
Narcolepsy - A brief overview
Symptoms
Cause
Treatment
Conclusion
;